Newly released ridership numbers for May show an increase of 83 percent above the same month last year and 430 percent growth over fourth quarter 2009 following the July 18, 2009 opening of light rail.

"Seven years after the first Link trip, we have a greater appreciation for how historically significant that moment was for our region," said Sound Transit Chair and King County Executive Dow Constantine. "It was the day that commuters began to experience the benefits of reliable, high-capacity light rail, and they've been demanding more ever since." 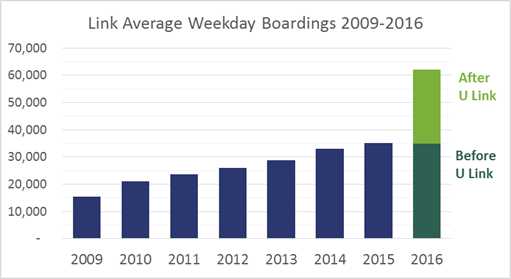 Link by the numbers:

And right now contractors are mining the final Northgate Link tunnel segment that will extend light rail service 4.3 miles north from the University of Washington Station at Husky Stadium to the U District, Roosevelt neighborhood, and Northgate Mall. That project is scheduled to open in 2021.

In 2023 Sound Transit is on track to operate nearly 50 miles of light rail lines extending to Lynnwood in the north, Bellevue and Redmond's Overlake area to the east and the Kent/Des Moines area in the south. Contractors have begun East Link construction in downtown Bellevue later this spring and the light rail extension to Lynnwood is in final design.

In November voters will decide whether to expand the system further via the proposed ST3 expansion plan. The ST3 Plan would build 62 additional miles of light rail and 37 new stations to form a 116-mile regional system, as well as bus rapid transit, commuter rail and other regional transit investments. The ST3 Plan would construct light rail further north to Everett, further south to Federal Way and Tacoma, and further east to downtown Redmond. Extensions would connect West Seattle and Ballard to the system, and a new line in East King County would connect South Kirkland, Bellevue and Issaquah.