**UPDATE** The contractor will not be working at the Division Avenue and J Street intersection this weekend, Aug. 2. Crews will start work on Division Avenue between J Street and K Street on Monday, Aug. 5.

To install underground utilities, Sound Transit's contractor will completely close the intersection at Division Avenue and J Street during the weekends of August 2 and August 9. Crews may also work in this intersection during the week of August 5 with the eastbound traffic lane open. The contractor can work day and night (continuous construction), and obtained a noise variance for the night-time work from the City of Tacoma.

In the Stadium District, the contractor continues to install stormwater pipes and structures underground at the N. Tacoma Ave. and N. 1st Street intersection. In the N. 1st St./N. E Street closure near Stadium High School, crews continue to prepare the street for rail installation. Last week, crews poured concrete around the rails between Tacoma Ave. and Broadway, and they may do another concrete pour this week.

For the traction power substation on Stadium Way, crews continue building a drainage system on the hillside. In addition, the contractor plans to install more rail on Stadium Way in between Division Avenue and S. 4th Street.

In addition, the contractor is coordinating with Tacoma Public Utilities to connect some customers to the new water line on Martin Luther King Jr. Way. TPU is scheduling the water service connections with customers. These TPU final connections also involve some construction work.

Division Avenue and J Street intersection – intersection closure. The Division Avenue and J Street intersection will be completely closed during the weekends of Aug 2-5 and Aug. 9-12. Follow detours on I St., 6th Ave., and Martin Luther King Jr. Way. In addition, crews may work in this intersection during the week of Aug 5 with one lane open on Division Avenue. Several temporary bypass pipes will be installed for stormwater and sewer work along the curb on N. 3rd St.,  N. 2nd St., Division Ave., and S. J St. The bypass pumps will run 24-hours/day, and will be monitored. The work can take place day and night (continuous construction). The contractor obtained a noise variance from the City of Tacoma to do night-time work.

Stadium Way from Division to 4th Street: southbound lane closure; use detours. Stadium Way is closed to southbound traffic from Division Avenue to the 4th Street. Crews installed the first track on Stadium Way south of Division Avenue. After the test track is approved, crews will install the next rail segment below this area. Work on the traction power substation along the hillside continues, as crews build a drainage system. In addition, crews are installing foundations for the Link power poles. 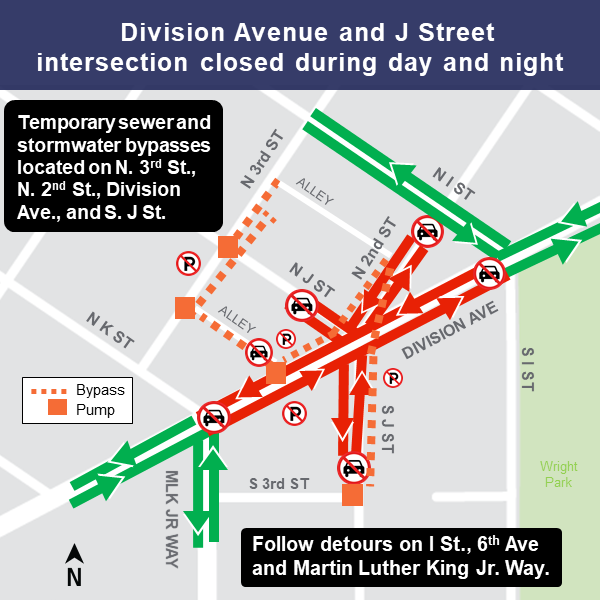