Get ready for the Seattle Squeeze

As we hope you have already heard, the Alaskan Way Viaduct permanently closes on Jan. 11 to make way for the new State Route 99 tunnel.

Before the tunnel opens, construction crews will need approximately three weeks to realign the highway into the new tunnel.

During the closure, up to 90,000 vehicles a day that use the viaduct could shift to surface streets through and around downtown Seattle.

This will cause major traffic congestion and travel delays until the tunnel opens.

If everyone driving on the viaduct today tries to drive through downtown, traffic will grind to a halt.

For commuters coming to Seattle from the north and south, Sound Transit’s Sounder and Link light rail trains don’t spend any time stuck in car traffic - this will be a great opportunity to try commuting by train.

Sounder serves 11 cities during weekday peak hours on two lines, from Everett to Seattle and from Lakewood/Tacoma to Seattle.

Link Light rail runs traffic-free through Seattle, Tukwila and SeaTac, serving 16 stations from the University of Washington to Angle Lake.

We will have an extra Link train ready to help with crowding during the shutdown and all available cars will be in service.

Most Link trains have three cars and run every 10 minutes, and during peak hours we add several two-car trains to ensure that trains run every 6 minutes.

We do not currently have enough light rail cars to run all three-car trains during rush hours.

Link trains are already very full during rush hours and we should expect even busier trains during this work.

If possible, try to flex your work hours to take the train outside of the busiest rush hours.

Parking at the Tukwila and Angle Lake Link stations fills up early – often before 6 a.m.

Catch a ride to the station

Sound Transit is partnering with King County Metro, the City of Seattle and three of the area’s ridehailing/ridesharing companies—Uber, Lyft, and ReachNow—to encourage transit use during the Viaduct closure.

Read more about the program offering $2.75 discounts on ridehailing trips to and from select light rail stations and transit centers outside of downtown.

Sounder trains will also be busy, but we have room for more riders.

Sounder runs on tracks owned by the Burlington Northern Santa Fe Railway and we are not able to add trips during this work.

Below is a snapshot of our average weekday ridership on Sounder to give you an idea of which trips will have the most room.

The light blue bars show maximum seated capacity, dark blue shows seated riders. These were the average weekday boardings during the first half of 2018. 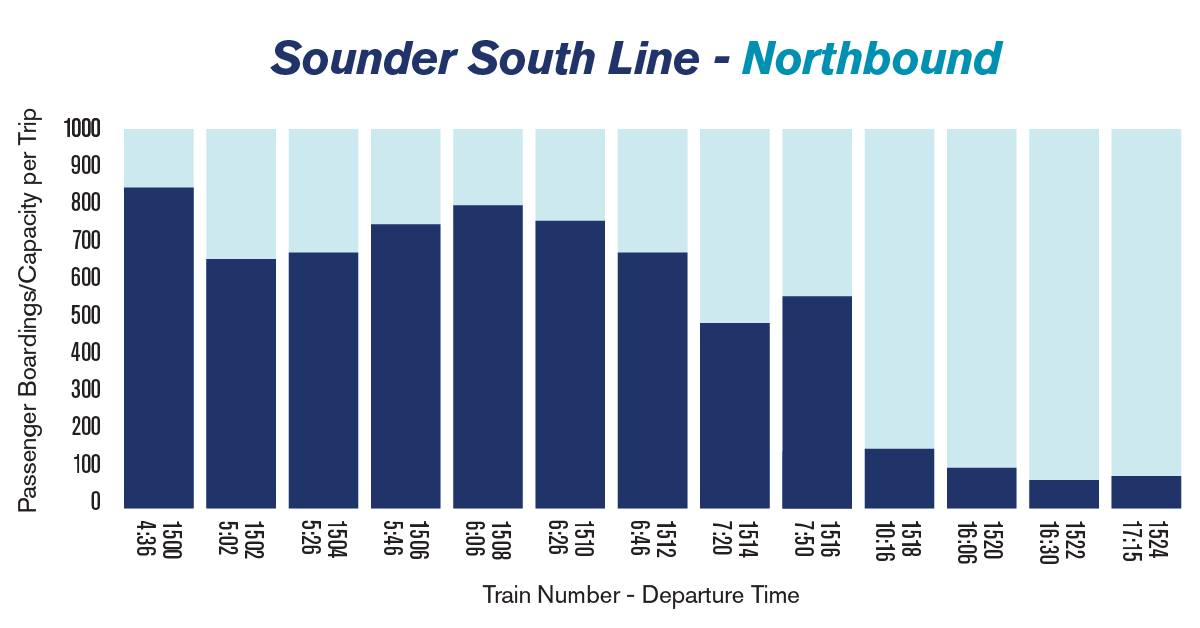 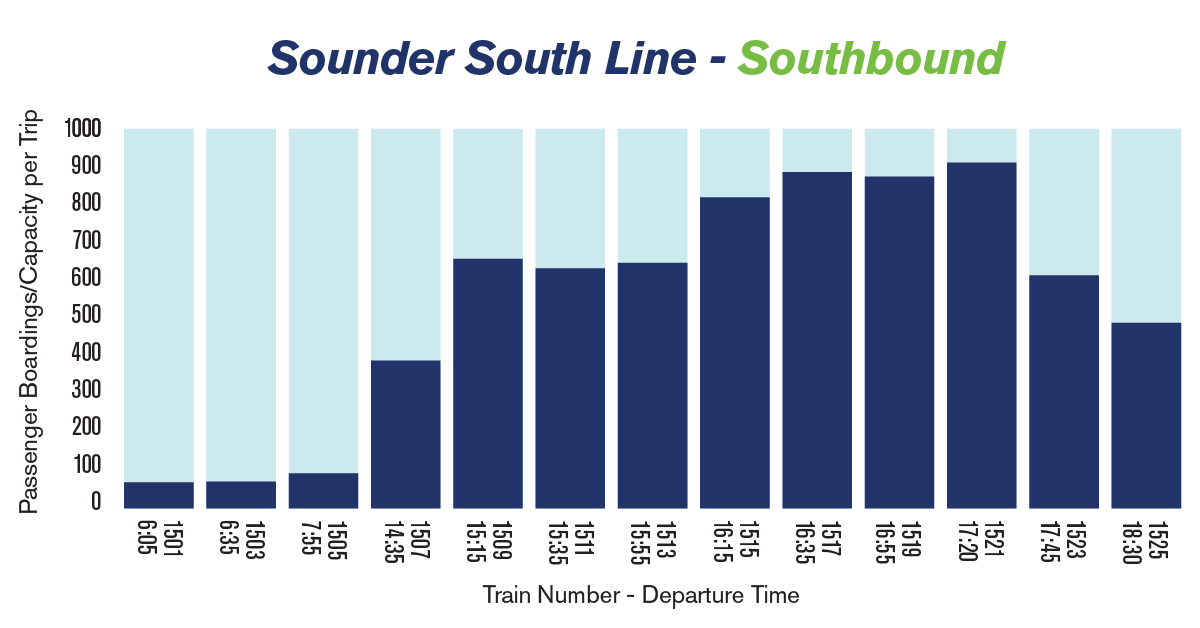 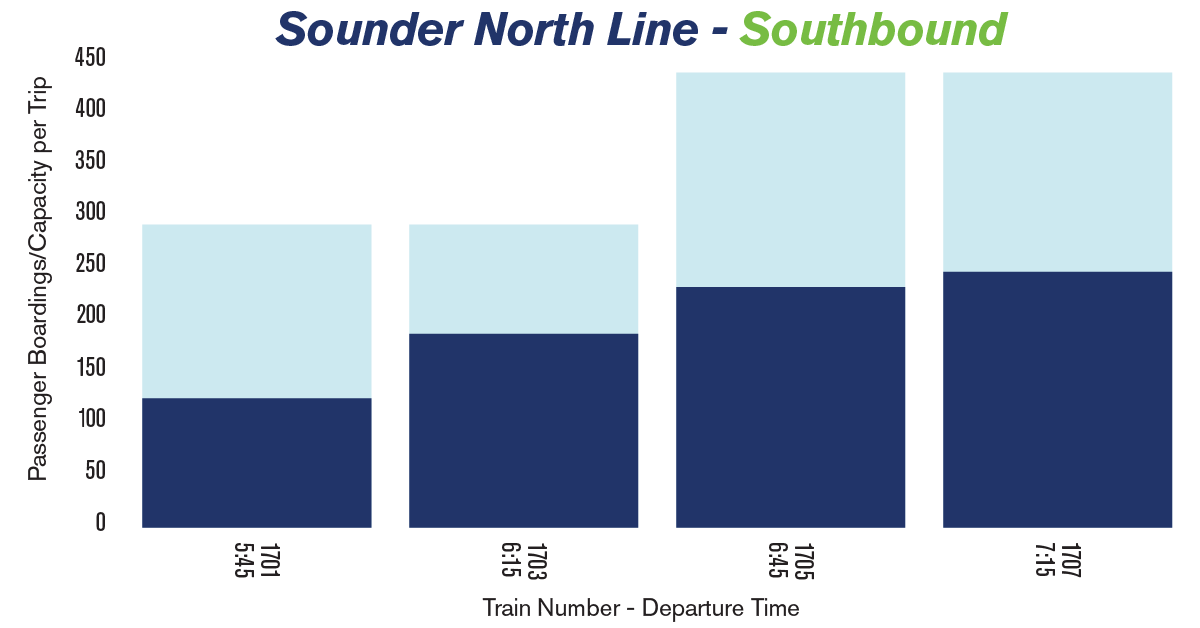 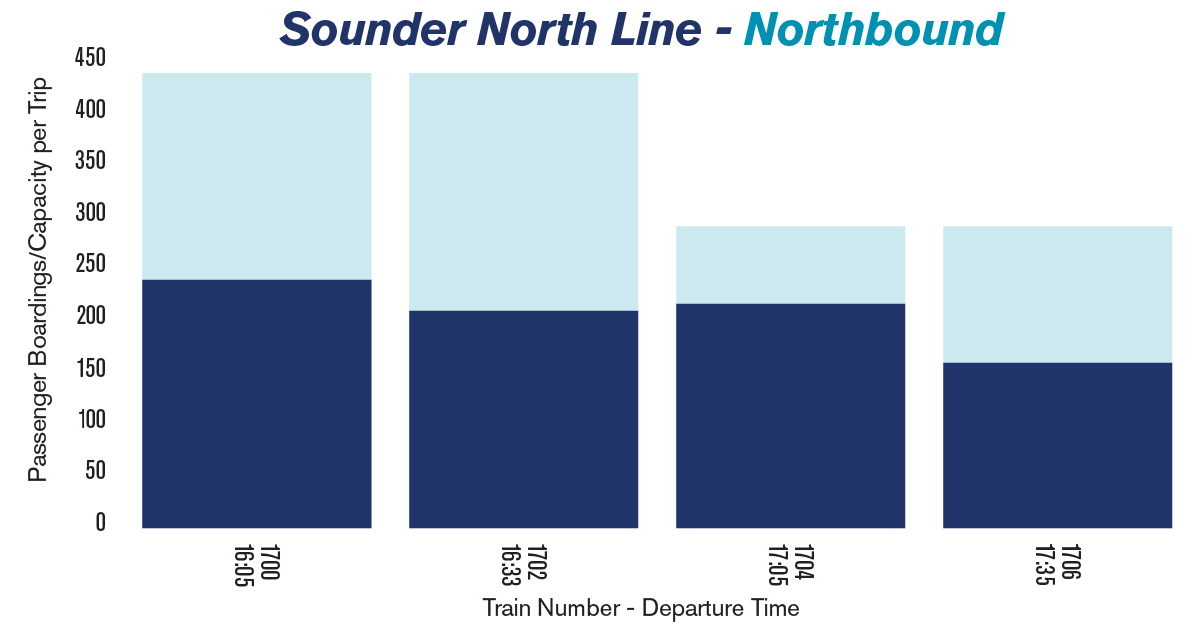 Note: all of our Sounder parking lots fill early.

Did you know that most employer-provided ORCA cards or those loaded with a monthly pass can be used to ride four different Amtrak Cascades trips between Seattle and Amtrak stations in Emonds and Everett? This could be a great option if you can go in to work later and catch the 7 p.m. train home. Here's the schedule:

Remember, Amtrak Cascades does not accept Sounder day passes or single-trip tickets. To ride Rail Plus trains, you must have an ORCA card loaded with a monthly pass, an ORCA Passport card or pay regular Amtrak Cascades fares. Rail Plus tickets are only available on weekdays.

Confirm your pass is equal to one-way fare for travel (i.e., your ORCA pass covers $4 fare from King Street Station to Edmonds or $5 fare to Everett). Short version - if your employer provides your ORCA card, it will work for Amtrak Rail Plus.

Before getting on the train, you must get a Rail Plus validation ticket from a Sound Transit ticket vending machine. Rail Plus tickets are only available on weekdays.

Please follow these steps at the ticket vending machine:

The station ticket machines will not print a Rail Plus validation ticket if you do not have the correct ORCA pass.

Use our online trip planner to find the best route to your Sounder station.

Working together, we’ll all get through it

There’s no way around it – commuting to Seattle is going to be rough in January. Here are a few basic tips to help commuters navigate the closure period:

Resources to plan your commute

Back to The Platform