To replace underground utilities along the future Hilltop Tacoma Link Extension route, Sound Transit's contractor will temporarily close traffic lanes in areas along Martin Luther King Jr. Way, Stadium Way and Commerce Street. In order to ensure transparency and communication regarding the upcoming construction and traffic, Sound Transit and the City of Tacoma will send a weekly construction alert. We hope this information will ease the impacts and encourage the support of local businesses.

The following construction and traffic closures are expected during the week of Nov. 26, 2018:

MLK between South 15th and South 19th will maintain two-way traffic during construction of the storm and sanitary sewer. The intersections of South 16th Street and South 17th Street and MLK will be closed while the contractor connects the side streets to the main line. Then these intersections will be open. Access to driveways and alleys will be maintained. Parking will be restricted on MLK and on South 16th and South 17th for the duration of construction. Please move your vehicles during the times shown on the no parking signs – thank you. Pedestrian access will be limited in these areas.

Access to downtown via the 705/Stadium Way exit is closed until mid-January 2019. Detours are in place. One-way traffic will be maintained from South 9th to 705 until January.

Traffic south of 4th Street on Stadium Way will be detoured onto I-705. To avoid travelling on I-705, please follow the detours on Street. Helens Avenue, Broadway and Tacoma Avenue.

Stadium Way continues to be closed to traffic from Broadway to 4th Street. until Dec. 28. Please follow the detours on Street. Helens Avenue., Broadway and Tacoma Avenue. One way traffic on Stadium Way is open from South 4th to Broadway. 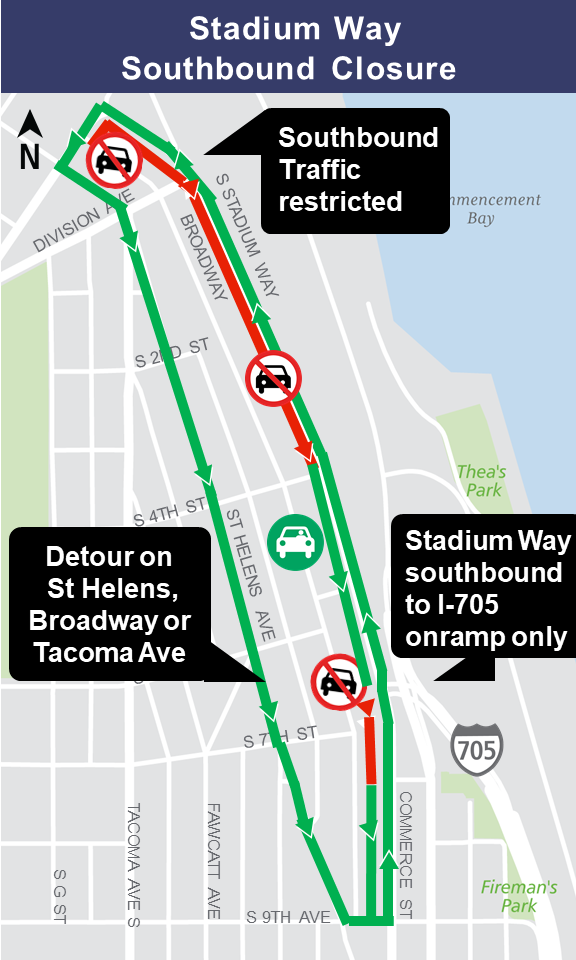