At the Division Avenue and J Street intersection, crews are working on underground utilities and will install a temporary bypass near J Street and N. 3rd Street. Near Tacoma General Hospital, crews are installing utilities on the west side of Martin Luther King Jr. Way from S. 3rd St. to S. 5th St.

Looking ahead to the week of Sept. 30, the contractor plans to start water line work on Martin Luther King Jr. Way from 11th Street to 6th Street and start stormwater work at the intersection of MLK Jr. Way and S. 16th Street.

Stadium Way from Broadway to the 705 onramp -- southbound lane closure; use detours. Stadium Way is closed to southbound traffic from Broadway to the 705 onramp. Please follow detour routes on Broadway, St. Helens and Tacoma Avenue, and consider alternate routes to access downtown and/or the 705.  Stadium Way continues to be open northbound from the 705 to Tacoma Avenue, including left turns at S. 4th Street. Crews are installing foundations for Link power poles and removing pavement for track installation. On Stadium Way between Division Ave. and S. 4th St., crews will move rail into position on the west side of the street. This week, they plan to pour concrete in this section. Drivers going eastbound on S. 4th St. will not be able to turn right onto Stadium Way but will be able to turn left on Stadium Way to go up the hill.

S. 8th Street from Martin Luther King Jr. Way to S. L Street – street closure. Crews will pave S. 8th St. and then move out of the area temporarily. They will return to S. 8th St. to do stormwater work near the roundabout at the intersection of S. 8th St. and L St.

Martin Luther King Jr. Way between S. 14th to 16th Street – southbound lane closure.  The southbound lane of MLK Jr. Way is closed at S. 14th St. to S. 16th St. for stormwater work. In addition, crews continue building foundations for the Link power poles in this area. During non-working hours, MLK Jr. Way will be open to two-way traffic, and parking will be available. 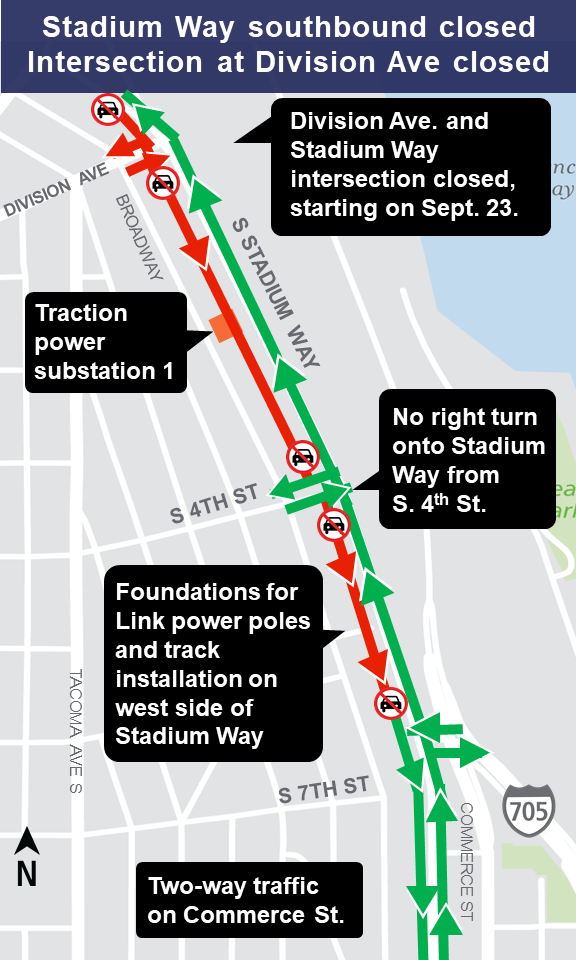