Looking for the latest news on projects that impact you? You've come to the right place.
East Link Extension South Bellevue Station

The second of two weekend closures of all lanes on 112th Avenue Southeast, between Bellevue Way Southeast and Southeast 8th is scheduled during the weekend of April 21-22. The weekend closures are needed to relocate utilities in the roadway and perform utility crossings. Additional closures may be necessary to complete this work. 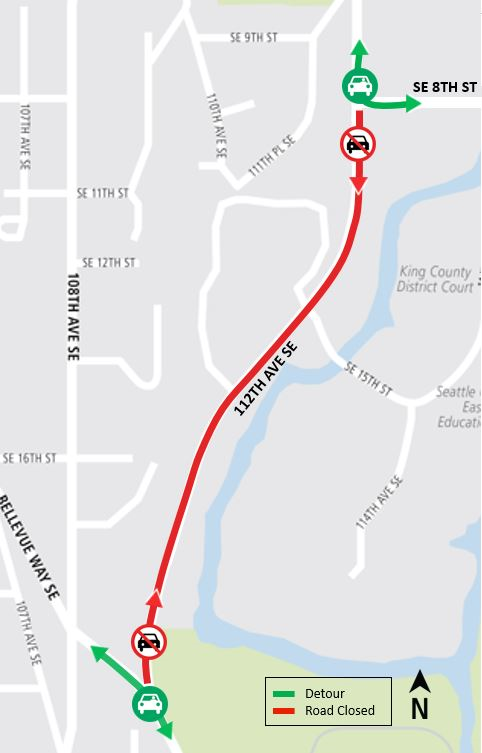 Local access to Bellfield Residential Park will be maintained. Flaggers and uniformed police officers will actively assist with traffic control and driveway access. Please follow the direction of flaggers and signage to safely access your destination.

24-hour closure: Starting Monday, April 16, Sound Transit's contractor closed the Bellevue Way Southeast to I-90 west HOV ramp. This closure is necessary to provide a safe work area and maintain safety for the traveling public. During the closure, crews will construct elevated columns and pier caps adjacent to and over the ramps from I-90 to Bellevue Way Southeast.

Monday-Friday 9 a.m. to 4 p.m.: As needed, In order to complete utility crossings between Main Street and Southeast 6th Street, crews will alternate the sidewalk between the east and west side of 112th Avenue Southeast. Signed detours will be in place for pedestrians and bicyclists.

Monday-Friday 6 a.m. to 6 p.m.: Work is set to begin on the light rail trench and guideway adjacent to Bellevue Way Southeast, between the South Bellevue Station site and the Wye at 112th Avenue Southeast. Throughout the project, two lanes will be maintained in the peak direction: northbound in the morning and southbound in the afternoon. Sound Transit's contractor will use cones and lane delineators to guide traffic along Bellevue Way Southeast. Please follow the direction of flaggers and signage to safely access your destination. 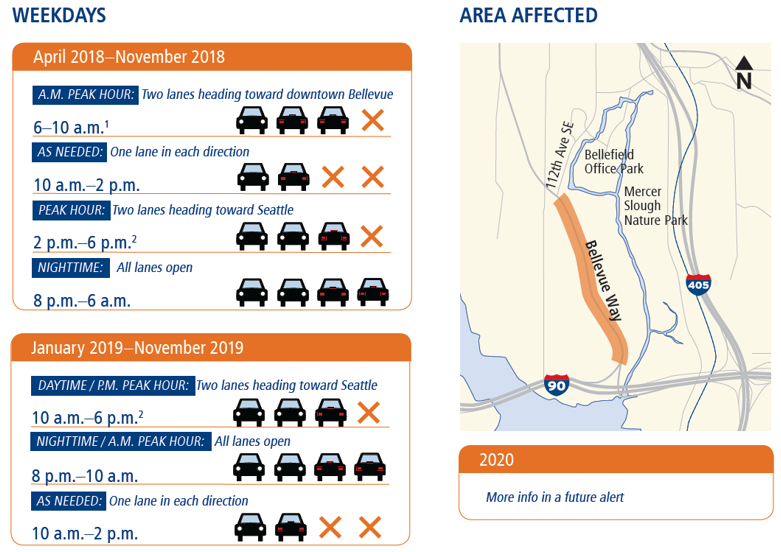 In order to work in the eastside curb lane while maintaining two lanes of traffic in the peak direction (northbound 6-10 a.m. and southbound 2-6 p.m.) crews will use the ‘southbound center lane' as a reversible traffic lane. At times, northbound vehicles will travel in what is normally a southbound lane.

The graphic above illustrates the direction of traffic flow throughout the day. Tail lights indicate vehicles traveling northbound and headlights represent vehicles traveling southbound. During all work activity the eastside curb lane will be closed and occasional mid-day closures (10 a.m. to 2 p.m.) of a second lanes may be needed. From 8 p.m. to 6 a.m. and during most weekends, all lanes will be open to traffic.

6 a.m. to 10 a.m.: The eastside curb lane will be closed at 6 a.m., but work will not begin until 7 a.m. Two lanes of northbound traffic and one lane of southbound traffic will be maintained. Drivers needing to access 112th Avenue Southeast will need to travel in the furthest right open lane.

10 a.m. to 2 p.m.: Occasional closures of two eastside lanes. One lane of traffic will be maintained in each direction. Crews do not plan to close the second lane during the week of April 23rd. Typically when the second lane is not closed from 10 a.m. to 2 p.m., the 6 a.m. to 10 a.m. configuration maintaining two lanes of northbound and one lane of southbound traffic will continue until 2 p.m.

2 p.m. to 6 p.m.: The eastside curb lane will be closed. One lane of northbound traffic and two lanes of southbound traffic will be maintained. 2Occasional closures through 8 p.m., with work until 8 p.m. more likely between June and September.

Early morning work at I-90 in Bellevue